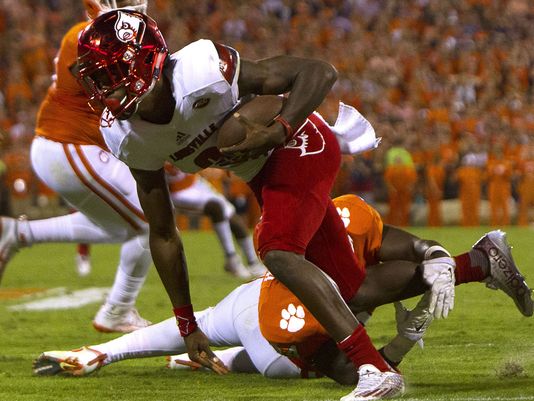 Since the University of Louisville lost to Clemson 42-36 at the beginning of October, the Louisville fanbase has noticed a change in behavior from our previously friendly hosts. Clemson has long held a reverence among college football fans as having one of the most hospitable fan bases in the country. Just a bunch of good ole’ preppy bunch that will gladly welcome you into their tailgate for a beer and brat. Always considered the lovable bunch that suffered a #Clemsoning (or two) every year that inevitably ruined Clemson’s chance at national prominence.

Now enter October 1. Lamar Jackson brings Louisville within inches (literally) of knocking off the vaunted Clemson team, and elevating the Louisville program into the national lexicon. So Clemson gets its win, a very strong win at that, and hey, it was a great game, right?

Clemson fans have developed a strange obsession with wanting to refute any national mention of both Louisville and Lamar Jackson, while not being able to enjoy the win and their #2 ranking. They are likely to run the remaining schedule and go back to the playoff for a second consecutive year.

So the Louisville fan base has just one question for the Tiger faithful. Why you mad bro?

While I do find it strange and frustrating the sudden disdain Clemson fans have for Louisville, I do understand it. I do. I’m here for you Clemson fans. I want to explain your change to the masses and help you find peace in your undefeated season. But to truly understand the Clemson dilemma, you have to go back to 2012.

In the 2012 season, Florida State beat Clemson and finished 12-2, 7-1 in the conference and edged out Clemson (11-1, 7-1) for the Atlantic title. Clemson had won the division previously, but this was the start of the Florida State reign. The next season, Jameis Winston’s first season starting, Florida State won the final BCS Championship and again kept Clemson from national prominence.

In 2014, Louisville’s first season in the new ACC, Florida State made it to the first ever College Football Playoff unscathed, only to lose to Oregon. Clemson was again second in the Atlantic Division, but Louisville gained a win in conference play, with Bobby Petrino’s system starting to catch on with Charlie Strong’s remaining players.

Last season, sensing an opening with Winston jumping to the pros, and touting their own Heisman candidate at quarterback, the Tigers finished the regular season undefeated and found themselves in the National Title game against Alabama. While Alabama ultimately won 45-40, Clemson showed they were for real and should be a top threat this season in returning to the championship. Lead by most of their offense returning, including running back Wayne Gallman and third place Heisman candidate Deshaun Watson, they finally had their opening.

Enter Lamar Jackson. Louisville was slowly adjusting to the ACC and building their recruiting up, but Lamar Jackson was the game changer Louisville needed to elevate the program into the limelight. just two weeks after completely dismantling Florida State at home, Jackson led the Cardinals into Death Valley and showed everyone in the country that they were for real. Jackson was already garnering tons of national attention as one of the most prolific playmakers college football has ever seen, and Watson was off to a rocky start, despite Clemson remaining undefeated.

I’ve heard every week that Lamar has already locked up the Heisman trophy. I’ve heard that he’s the greatest player college football has ever seen, and that he is 5x better than Michael Vick (from Michael Vick). And I’ve heard that Deshaun Watson just isn’t the same player he was last season. That Lamar’s number are so far ahead of everyone else’s that he could average enough points alone that would beat most teams.

This is why Clemson fans are panicking. They had their opening. They were primed for at least a couple years of uninterrupted dominance and shots at the National Title, along with a Heisman trophy. And, in their opinion, Louisville ruined it. Louisville has taken all the national attention for the ACC, Lamar has taken the Heisman conversation by the throat, and Clemson got left standing in the cold.

The thing about all of this is: Clemson will probably get to the playoff. They win out and they are in. They control their own destiny, and proved that they could even hang with Alabama last season.

Louisville is coming. They put everyone on notice by hosting their first ever College Gameday, and thoroughly destroying Florida State. Lamar Jackson will be back for at least one more collegiate season and the quarterbacks coming up behind him (Jawon Pass, Malik Cunningham) show the tools to continue Louisville’s ascent. And by the way, Bobby isn’t going anywhere.

Florida State will rebound too. Deondre Francois is going to be a problem if Jimbo can figure out how to keep him upright, and Florida State is recruiting in the most talent rich state in the country. They have several young stars on the defense and are already showing the turnaround is in place. But for this season, enjoy yourselves Tiger fans. You’re undefeated, ranked #2 and likely going to be able to showcase yourselves for a second year in a row on the grandest stage of them all. Just don’t get comfortable at the top.

Updated 11/3/2016: I misspelled Deshaun Watson’s name in the Michael Vick paragraph. I had it very politely pointed out by a Clemson fan. My deepest apologies.

7 thoughts on “Fansplaining: Why Clemson fans are so mad at Louisville and Lamar Jackson”