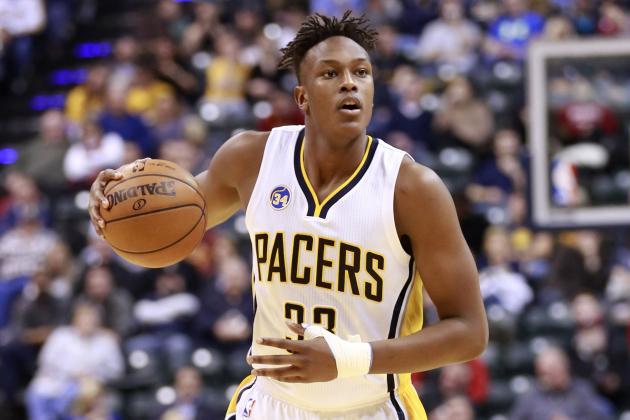 The MIP is is typically an award reserved for second year players making the adjustments learned from their first year in the league and bench players finally given the opportunity to start (sometimes a combination of both). This year is not much different, with one exception. We’ll start by looking at the exception.

Adams is one of my favorite players in the NBA due mostly to his personality and look. He looks like a pirate and it’s fantastic. Last season he averaged 8 ppg, 6.7 rpg, and had a slightly above average PER of 15.5. He made a difference in the playoffs for the Thunder and, in my opinion, cemented himself as the starting center on this team. Eyes Kanter is offensively talented, but depending on how much Russell Westbrook is relied on as the primary (and possibly only) scorer on the team, they may want to go with the defensive anchor of Adams over Kanter. If that’s the case, look for Adams to have a monster year.

Turner flashed his low post dominance last season, getting to a 15.4 PER despite only putting up 10.3 ppg and 5.5 rpg. Turner projects as a defensive anchor for the Pacers going into the future, and given the opportunity to start, should flourish. The presence of Al Jefferson will give Turner an experienced old head to learn from and grow his offensive abilities.

Before we go on, let me say this. All four of the players on this list are players I really enjoy watching. Russell is someone I have really high hopes for and I think that he has matured and grown a lot since the nightmare that was his rookie season. Russell averaged 13.2 ppg, 3.4 rpg, and 3.3 apg last year, but only had a 13.2 PER with 0 win shares. Advanced metrics don’t love Russell, but his growth should change things in that department.

Probably the most intriguing player from last seasons draft, Porzingis could be in for a big time season. Averaging 14.3 ppg, 7.3 rpg and earning a PER of 17.7 in your rookie year is no small feat. The additions of Derrick Rose and Joakim Noah in the offseason have elevated expectations in an already hungry New York market. Add in Carmelo Anthony and the Knicks fans are understandably excited. Look for the Knicks to sneak back into the playoffs this year potentially.